The Language Area in a Montessori classroom isn’t confined to just one space, but is present throughout the entire classroom. Preparation for reading and writing is introduced through repetition of Practical Life and Sensorial Materials, which focus on left-to-right/top-to-bottom motions, sequence of steps, and use of tools that strengthen and refine fine motor skills. Sound Cylinders in the Sensorial area prepare the ears for hearing subtle differences in sound. The Science and Geography area (as well as Math and Sensorial), contain a variety of vocabulary-enrichment activities, as objects and places are named and identified. The Art area also helps prepare students for writing as they interact with different tools, and use their imaginations to create stories about their artwork.

In the Language sequence specifically, children begin with a great deal of oral language practice: songs, finger-plays, rhyming, and “I Spy” games, to help recognize by ear the sounds which make up the words we speak. As children show phonemic awareness (that the sounds we speak are joined together to form words), we begin the process of connecting the symbols of the individual letters to the sounds they make. Letter sounds are introduced using the Sandpaper Letters, through a lesson format called the Three Period Lesson. Letters are presented verbally, visually, and tactilely as the child will see, hear, say, and touch the sandpaper letter form during the lesson. The sound of the letter is introduced, rather than the letter name – /b/, rather than “bee”, and here at Prep, we use the lower case, manuscript alphabet to introduce the sounds.

As the child makes the connections, objects, then pictures, with those initial sounds are introduced to help solidify the connection. For example, a “car” may be shown in connection with the sound /c/. Later in the language sequence, when the child has mastered a number of letters, s/he is introduced to the Movable Alphabet, a box containing multiple copies of each letter. Children are invited to then begin the process of composing phonetic words, such as c-a-t, in which each sound of the word can be heard. This process develops over time, and word patterns, such as silent “e”, or double consonants such as “/sh/” can be introduced. Eventually, the child will begin to form sentences with the Movable Alphabet, and spacing, parts of speech, and punctuation may be introduced. The process of composing words with phonetic sounds leads in time to the child being able to decode a word, or “sound it out” – which becomes reading. Along the way, as a child begins to decode/read, sight words are introduced as well. During this process, as the child’s hand strength and coordination develop, s/he will also begin to form letter symbols with pencils, and a move toward abstraction will be to write down the letters and words s/he composes, imagines, or sees in print.

Four ways to support your child in language development include:

Give your child the time and space to develop, and you’ll see their “explosion” into language will occur naturally, and it will be a joy to watch! 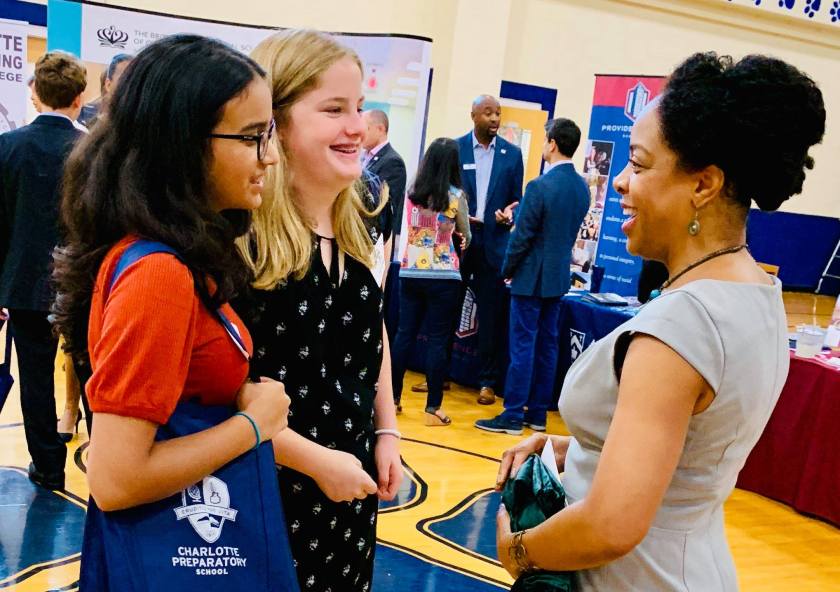 This Friday, September 27, we will host 20 schools and boarding schools at our annual High School Fair. Eighth-grade students and their parents will attend and gather information about potential destinations for high school.

For our eighth graders, this is one of the first steps in the process of determining which school is the best fit for them after they graduate from Prep. In preparation for the Fair, students have been working with Head of School Eddie Mensah in their Leadership classes on skills such as how to ask questions, shake hands effectively, and how to join a conversation. Having popped into one of those classes, I saw students practicing the art of approaching a group already engaged in conversation, and deftly weaving their way in. Not an easy task and the practice showed student growth for sure.

Eighth-grade students will be wearing professional dress for the day, as each student wants to represent themselves in the most positive way possible, with their “best foot forward.” While it is important to note that students are exploring options for their next school, the High School Fair is also where the attending schools are hoping to show their best selves to students and families as well. This should put eighth graders at ease and allow them to take in all the information possible as they begin the high school selection process.

We look forward to another successful High School Fair and by Friday evening, eighth-grade families will have much to discuss at the dinner table. The Fair is another stepping stone on the journey to Beyond Prep–a partnership that we look forward to experiencing with all families.

Charlotte Prep, in conjunction with the Charlotte Arts and Science Council, is pleased to announce the two-day residency of children’s book author Kelly Starling Lyons. END_OF_DOCUMENT_TOKEN_TO_BE_REPLACED

Do you suffer from anxiety? Does your child or partner? Come to Prep on the evening of February 8 to learn how to cope and find hope.

Join us at 6:30 p.m. for a screening of Angst, Raising Awareness Around Anxiety, a new documentary that explores anxiety, its causes and effects, and what we can do about it. The film features candid interviews with real kids and teens and Olympian and mental health advocate Michael Phelps. Also, the documentary provides discussions with mental health experts about the causes of anxiety and its sociological effects, along with the help, resources, and tools available to address the condition. END_OF_DOCUMENT_TOKEN_TO_BE_REPLACED

The New Year can be an excellent time to make resolutions for the future, but it can also be a great time to get back to the basics. Let’s resolve to reinforce healthy habits for our children and ourselves.

Here are my top three: END_OF_DOCUMENT_TOKEN_TO_BE_REPLACED

With the holiday break coming up, you may be looking forward to curling up with a good book. We recently asked some of our Prep administrators to recommend their favorites for you. Enjoy! END_OF_DOCUMENT_TOKEN_TO_BE_REPLACED

Our much-loved BUDEE program (Be Understanding, Dedicated, Empathic, and Enthusiastic) features a monthly theme for the community to focus on, and for November, the theme is Gratitude.

When the BUDEE classes met this month, students were eager to share the contents of the Gratitude Bags they made at home. The objects they chose reflected their diverse personalities and families. Some included family photos. Some brought treasured stuffed animals. One brought a tennis shoe to represent a love of sports. Students of all ages embraced the opportunity talk about the people, places, and things for which they are grateful. Teachers had a choice in how they extended the lesson. One teacher created a gratitude jar for both groups while another took students to pick up trash around the school.

What is clear at each BUDEE class is just how much the children appreciate the time to be together. The classrooms come alive with laughter and conversation. Older students are grateful for the opportunity to lead, and the younger kids love hanging out with the “big kids.” 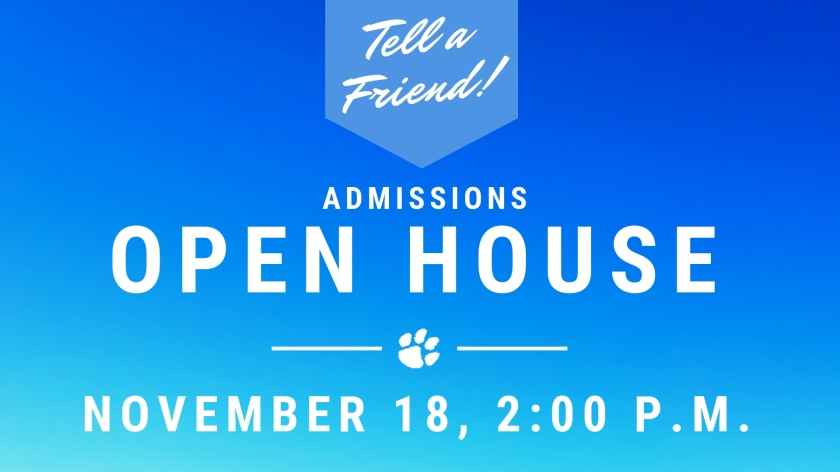 Admission season is in full swing, and our next Open House is on Sunday, November 18 at 2 p.m. in the Gymnasium. Word-of-mouth is our most powerful marketing tool. Why? Because at a smaller school like ours, the joy experienced here every day can best be shared by your stories. Stories like the tiny kindergartener bringing down the house at the Talent Show with her adorable rendition of “This Little Light of Mine.” Or the capable Middle School students leading younger classmates through the exciting games and exhibits at Spooky STEM Night. Or Head of School Eddie Mensah slipping away from his desk to play a few minutes of soccer during fourth-grade recess. END_OF_DOCUMENT_TOKEN_TO_BE_REPLACED

Last summer, Head of School Eddie Mensah recommended the Prep community read Unselfie. Today, in the latest “Two Minutes with Eddie” video, he talks about why it matters. 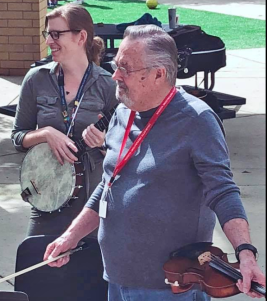 One of the many blessings of a smaller school is the ease with which teachers can collaborate. Middle School Language Arts teacher Katherine Slayton and Music and Band teacher Katie Kilroy recently teamed up to provide fifth grade English Language Arts students an engaging lesson to cap off their study of Appalachian literature.

“As part of this study, we explored the context of Appalachian history and culture, and we also listened to bluegrass music and analyzed lyrics to some classic country music such as ‘Country Roads’ by John Denver and ‘Coal Miner’s Daughter’ by Loretta Lynn,” Mrs. Slayton says.

She worked with Ms. Kilroy to expand this lesson by inviting two local musicians, guitarist Greg Clarke and fiddler Phil Dowis, to come and tell about their instruments and perform classic bluegrass. Ms. Kilroy, a talented and versatile musician in her own right, joined the visitors to play the banjo. END_OF_DOCUMENT_TOKEN_TO_BE_REPLACED

The best way to learn more about Charlotte Prep is to visit our campus and meet with our Admissions team.