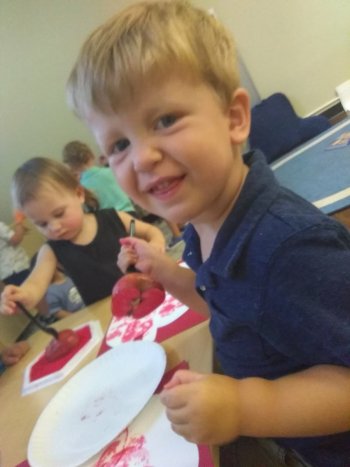 One of the most critical aspects of Montessori education is the relationship that this educational model has to child development, and really, to the neurology of the developing brain. Children are naturally inclined toward discovery and play. Beginning in infancy, babies delight in games like peek-a-boo, and once mobile, they begin reaching out to discover the world around them using all their senses. Picking up an object from nature or the space around them, children imagine the possibilities it contains by experimenting with it—banging on something, putting it in their mouth, and manipulating it in a variety of ways. These experiences begin to develop the neuro-pathways within their brains, thus initiating the process of learning.

Montessori classrooms are sometimes criticized for being “too limiting”—not allowing for imaginative play. However, as Maria Montessori herself discovered, children gravitate toward realistic objects that allow them to explore their world with purposeful play. Make no mistake, there is imagination happening here, but at the same time, the children’s play is actually laying the groundwork for their future learning.

A recent article in the New York Times, “Let Kids Play,” highlights certain benefits of children’s play that have been documented through research, including social and emotional skills and executive function—critical skills in today’s society. So much so that the American Academy of Pediatrics is recommending that parents are “prescribed” play with their children during pediatric well visits to encourage that interaction. Rather than over-scheduling children’s time and activities, children should be given time for play, which fosters intrinsic motivation, engagement, and joyful discovery. All of these are features of a Montessori work cycle when children are given the opportunity to choose and interact with attractive and meaningful objects to allow this discovery to take place. In the Montessori environment, the materials and activities are called “work” to lend them an air of importance. As stated by Dr. Benard Dreyer in the Times article, “The old saying is, play is the work of children. Play is the way they learn and the way they develop.”

In a Montessori classroom, the materials (we don’t call them “toys”) are laid out on the shelves in a particular sequence. As a child practices (or “plays”) with each item, she is doing so much more than just playing. She is growing her concentration, problem-solving, learning to organize, socializing with a friend nearby, or learning to wait patiently for a turn. She is developing neuro-pathways that help her gain muscle memory and make connections to things she has already practiced, while making impressions that will help her develop new skills in the future. So this play that the children are doing is genuinely purposeful and crucial in laying the foundation for future learning.

To learn more about the research on neuroscience and its relationship to Montessori education, I invite you to attend an upcoming lecture entitled The Brainstorming Tour: Powerful Voices for Montessori Education, featuring Dr. Stephen Hughes and Dr. Laura Flores Shaw. The event will be held on Thursday, September 27, at 7:00 p.m.,  at Queens University Sports Complex and Conference Center (see map). Tickets are $5 and are available here.

The best way to learn more about Charlotte Prep is to reach out to our Admissions Team and schedule a time to visit.